It’s LGBTQ History Month! To help you learn more about the Lesbian, Gay, Bisexual, Transgender and Queer/Questioning community and explain why support groups in schools matter, we’ve put together a few facts. Read on, and check out more in the infographic below! 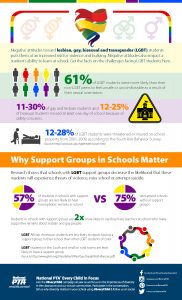 LGBT students were 61% more likely than their non-LGBT peers to feel unsafe or uncomfortable as a result of their sexual orientation.

This has a large impact on education: 11-30% of gay and lesbian students and 12-25% of bisexual students missed at least one day of school because of safety concerns.

And these concerns, sadly, are justified.

From 2001-2009, 12-28% of LGBT students were threatened or injured on school property, according to the Youth Risk Behavior Survey.

But support groups can help.

Students in schools with support groups are TWO TIMES more likely to say they have teachers at school who make supportive remarks about lesbian and gay people. Being part of an LGBTQ support group provides students with a sense of community and helps them grow emotionally.

PTA is Doing its Part, Too

At the 2016 National PTA Convention & Expo, members voted to adopt a resolution on the Recognition of LGBTQ Individuals as a Protected Class

It’s no secret that science, technology, engineering and math are the fields of the future. STEM became everyone’s vision of the future once Neil…