Teachers who can make learning come alive are true treasures. Think about that drama teacher who helped you find your voice, or that math teacher who did handstands to help you learn reciprocals, or the English teacher who shared books that made you feel understood.

These are the kinds of educators who hold onto the dream of what your child can be until they can embrace it for themselves.

The 2018 National Teacher of the Year, Mandy Manning, provides this kind of magic in her classroom for immigrant and refugee children at the the Newcomer Center at Joel E. Ferris High School in Spokane, Wash. She teaches English, reading, writing and math to students
who are new to the U.S. For many of Manning’s students, who range in age from 14 to 20, this is their first experience in a formal classroom.

It’s important to Manning to make sure her classroom is a welcoming oasis of calm, a place where her students can find solace in  discovering new a language and adopting new traditions—and to believe that a brighter tomorrow belongs them, too.

“I get to go on this incredible journey with kids who have come to the U.S. after some pretty traumatic experiences,” Manning said. “They’ve been through the worst and have come out on the other side excited to be in my classroom. They have an innate hope that is contagious. I feel privileged that I get to teach in that space every day.”

“Every student in this country deserves access to a teacher who is committed to their success,” said Carissa Moffat Miller, executive director of the Council of Chief State School Officers (CCSSO), which runs the National Teacher of the Year program.

The selection committee—which includes National PTA President Jim Accomando—said in a statement, “Mandy is a strong educator who believes in a great public education for every student and has a unique perspective on meeting the needs of some of our nation’s most vulnerable children.

Her fierce belief in her students, unwavering commitment to their learning, and demonstrated efforts to ensure that they can be successful both in school and in life make her an exceptional educator.”

The Path to a Calling 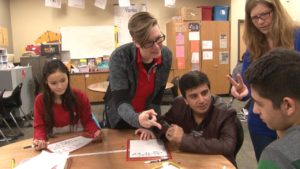 “ We have to remember to keep all children at the heart of this discussion and strive to build a
society where everyone has the opportunity to succeed.” Photo by Ferguson Films

While Manning is now a national beacon for inclusive classrooms, 19 years ago she was a psychology major at Eastern Washington University who thought her career was going to blossom into becoming a screenwriter and film producer.

A friend suggested that she consider becoming a teacher’s aide until her film career developed. She took that suggestion and began her first job in education as a para-educator in a special education classroom in Washington state.

As she continued to explore her career path, her journey led her to teaching English in Japan and working with The Peace Corps in Armenia.

“Everything in my life was pointing towards education,” Manning said. “It was cool to be another consistent, compassionate adult that my kids could rely on to help them grow into their potential.”

Eleven years later, Manning’s classroom has become the foundation of a new life for immigrant and refugee students at The Newcomer Center, where she welcomes as many as 30 new students every year. Her students spend up to five periods in her classroom each day, learning basic skills and how to adjust to their new world.

“It’s very fulfilling to teach students who want to learn,” said Manning. “My kids are so excited that it doesn’t feel like hard work … we are just so excited to see each other every day.”

While Manning has created a warm and welcoming environment in her classroom, she and her students are not immune to the current political climate and debate surrounding immigration.

“It broke my heart to hear my students ask, ‘When do we have to leave?'” So she doubled down on intentionally ensuring that her kids felt welcomed and loved. “We spend a lot of time talking about consequences and reactions [about immigration] instead of focusing on why people feel safer coming to a nation that isn’t welcoming right now,” Manning noted.

As long as we fear one another, we will never feel safe.

One of the ways that Manning tries to make her students feel safe is by visiting their homes. She discovered that it was too difficult for many of her students’ parents to take off from work or for the school to provide enough language support for interpretation during back-to-school nights. Through the home visits, Manning has the space to build a relationship in a relaxed environment that is on the family’s terms.

These visits often lay the foundation for the parents to trust her and reach out for support as the school year progresses.

“It’s great to see a whole other side of my kids and their families,” she said. “Sometimes the families will invite neighbors over to meet me. Some families are more social and inviting than others, but we all have the well-being of their child in common, and that is a great place to begin any relationship with a parent.”

A Platform for Action 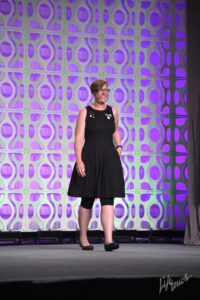 While her status as the 2018 National Teacher of the Year will pull her away from her students over the next year, she is determined to use her platform to encourage teachers to intentionally seek experiences outside of their comfort zones. She wants every teacher to create new experiences for themselves and their students.

“As we grow and evolve, we tend to separate ourselves and cluster into our own little tribes” said Manning. “We have to learn how not to alienate ourselves and instead connect with teachers in other classrooms, parents and community members. We have to begin practicing this for ourselves so that we can be an active demonstration for our students.”

In addition to encouraging teachers to step out of their comfort zone, Manning will also use her platform to leverage teacher leadership. She wants teachers to become more politically active and aware of how legislation impacts their classroom.

We have to be seen as instrumental figures in the future of our nation, from Pre-K to university. We have to be at the table, taking action and putting the story [of education] into reality for the long haul.

The final piece of her platform will be shining a light on the plight of the Yakama Reservation in the White Swan School District in Washington state. This reservation has been home to several indigenous tribes for generations, but it has been sorely forgotten by the U.S. government with many residents living in tents, houses built with particle boards and used FEMA houses from the aftermath of Hurricane Katrina.

“I was not prepared for what I saw,” Manning said. “My mind was blown. How in the world did we allow something like this to happen on U.S. soil? I don’t have all the answers for how to solve this issue, but I know that we need to call action to the problem.”

“Mandy dedicates herself to each and every one of her students,” said Reykdal. “She’s a proven leader in our state, and is the second National Teacher of the Year from Washington in the past six years. We are honored to have Mandy representing us to the nation.”

Manning has a tall order to fill during the next year, and she is embracing the task as an opportunity to celebrate the values and ideas that are still at the core of our county.

“Regardless of what’s going on politically, these [current conditions] do not represent who we are,” she said. “We have to see each other as human beings. We have to remember to keep all children at the heart of this discussion and strive to build a society where everyone has the opportunity to succeed.”

Read about the 2017 Teacher of the Year

Leah Lakins is a writer, editor and founder of Fresh Eyes Editorial Services. She lives in Brooklyn, N.Y.

When you hear the words “computer science,”do you imagine a college student sitting in front of a computer alone, typing code all day and…